CHICAGO — A short time can pass before a chance at redemption comes. For the Boston Bruins, it has been one year since they failed to repeat as Stanley Cup champions; for the Chicago Blackhawks, just two years.

Jaromir Jagr of the Bruins answered questions on Tuesday. 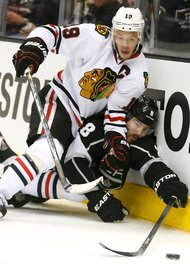 Chicago’s Jonathan Toews says that growing up, he modeled his game after Jaromir Jagr.

But for Jaromir Jagr, it has been 21 years since he last won the Cup.

“You guys still surprised I am alive?” said Jagr, still irrepressible at 41 as he greeted reporters on the eve of Game 1 of the finals at United Center. “Well, I am. I’m alive.”

Jagr won the Stanley Cup as a Pittsburgh Penguin in 1991 and ’92, when he was a mullet-haired 19- and 20-year-old. In the following decades, he captured scoring titles and an Olympic gold medal and starred in New York, Russia and the Czech Republic. In 196 playoff games, he has scored 196 points, tied for fifth in league history. But he had not returned to the Cup finals.

“That’s the goal for any hockey player, any hockey team,” he said. “They all have one goal, to win the Cup, but obviously, only one can do it. Then the next season starts again, and everybody has the same goal again. And again, and then again.” His voice trailed off and his eyes rolled, signaling the tedium of passing years.

The Blackhawks have not had to wait as long. The core remains from the 2010 title team that defeated the Philadelphia Flyers in six games. Until this year’s run, that stood as Chicago’s last postseason series victory.

Within days of celebrating that championship, General Manager Stan Bowman began dismantling the roster because of the salary cap. The playoff hero Dustin Byfuglien was sent to Atlanta. Defenseman Kris Versteeg was shipped to Toronto. Goaltender Antti Niemi was not re-signed.

“It seemed like a week after we were hoisting the Cup, half the team was off on different teams in the league,” forward Patrick Sharp said.

In 2011, Chicago made the playoffs on the last day of the season, only to fall to the top-seeded Vancouver Canucks in the first round in seven games. The next year, the Blackhawks again did not get out of the first round, losing to the Phoenix Coyotes.

Bowman, though, remained committed. “There’s something to be said for consistency,” he said. “We’ve had a lot of these guys for a long time.”

He was rewarded this year right from opening night, when Chicago beat the defending champion Los Angeles Kings — the start of an N.H.L.-record 24-game points streak. Now the Blackhawks are back on hockey’s biggest stage, older and wiser.

“At that time, our team maybe was too young and stupid to even know what was really going on,” Kane said, “and you kind of let it fly by without really soaking it in.”

Bruins General Manager Peter Chiarelli did not have to break up his 2011 Cup-winning roster because of the salary cap. Seventeen players from that team are still on the roster.

Last season, the Bruins fell to the Washington Capitals in seven one-goal games in the first round. This season, they rallied from a 4-1 third-period deficit in Game 7 against Torontoby scoring two goals with less than two minutes remaining in regulation and then winning in overtime.

“When you have the right people making decisions and the players executing with character, it propels you to success,” Chiarelli said.

One of the new guys on the Bruins’ roster is Jagr, who was acquired at the trade deadlineand whom the Blackhawks respect. Toews said Jagr was one of his favorite players when he was growing up in Winnipeg, Manitoba.

“I wore No. 68 when I was playing summer hockey a couple of seasons, I guess,” Toews said. “I had his Koho Jagr stick, so I really looked up to him. I was probably 9 or 10, and here I am getting a chance to play against him in the Stanley Cup final.”

Toews said he tried to model his game after Jagr.

“Well, you’ve got to tell him to slow down a little bit,” Jagr said, laughing, when told that.

Both are getting another chance at the Cup.

A version of this article appeared in print on June 12, 2013, on page B16 of the New York edition with the headline: After 21 Years, Jagr Savors Finals Return.